Use role-specific NFT avatars to bootstrap a socially scalable DAO centered around the shared goal of developing talent to channel into the Ethereum community.

We propose that the Ethernaut DAO deploys and controls a non-fungible token (NFT) with a limited supply, allowing participants to mint unique avatars, with varying degrees of rarity on specific traits, via a fully randomized minting process. These avatars will have roles, and allow to gamify the activities of the DAO.

An avatar may be minted by anyone who pays a minimum fee, with any additional value provided beyond the minimum fee considered as a donation. Donations increase the probability of producing a rarer avatar during mint.

All fees collected via minting will be used to bootstrap the DAO’s treasury, and build an initial donations pool to be distributed amongst mentors. Future exchanges of avatars will also accrue fees towards the DAO in a similar fashion.

This treasury will allow the DAO to provide allowance to any mentorships that need to cover trainee stipend payments, operational costs, developer compensation, future proposals, etc.

When deployed, the initial donation pool will be claimable by active mentors, at a specific date, with specific rates, determined and voted on by the DAO via a potential future proposal. The DAO may deploy other pools in the future, as well as other donation mechanisms, and even alternative fund raising mechanisms, as long as they align with the DAO’s core goals.

This mechanism is intended to provide a strong community incentive for mentors to become a part of the DAO, and thus help scale the DAO’s ongoing activity of onboarding developers into the Ethereum ecosystem.

As of the time of writing this proposal, and without any sort of economic incentive enacted, the Ethernaut DAO is training ten developers via three mentorship programs. The launch of three additional programs is imminent. There is clearly a lot of interest from trainees, but the amount of mentors, as well as the amount of available resources for them, are limited.

Additionally, even though per-hour stipend payments for trainees have proven to be very successful in giving trainees economic guarantees to take the leap of faith to Ethereum, these costs currently need to be covered by mentors, or their associated protocols in the case of protocol oriented mentorships. Even though the latter does not represent an economic impediment, it’s proven to be a point of friction.

This proposal is specifically designed to address these two bottlenecks; to collect and concentrate community donations for mentors, and to provide them with any resources they may need during training.

NFTs are chosen as the backbone of the proposal’s economic incentives since they are a fun and effective way for iterating towards an identity of the DAO, with the potential of consolidating its community in a way that is loose, and can be expanded in a myriad of ways in the near future.

An upgradeable ERC721 token will be deployed and owned by the DAO’s multisig.

Being able to upgrade the token’s implementation will allow the DAO to recover from potential bugs, and extend the token’s functionality in the future.

An artist will create a set of attributes that can be combined to generate 10000 unique Ethernaut avatars.

Each NFT will probably be composed of multiple images, and perhaps even audio. The artistic concept is still under development, but the idea is that the avatar comes with a background that can be used as a twitter banner, and an accompanying audio loop. This is still TBD though.

These will be shuffled, and kept secret. Whenever the token contract emits a mint event, a script will make sure that the corresponding avatar is published at a publicly known IPFS location.

The DAO will have the ability to mint a limited set of 100 NFTs without paying any fees, but without the ability to increase the probability of getting a rarer NFT in any of these mints either. This is so that the DAO can give away some NFTs to community members that were critical to the formation of the DAO, the first set of mentors, etc.

In a future proposal, the DAO will begin using part of the raised funds to deploy donation contracts, allowing mentors and other avatar token holders deemed by the DAO to have contributed to its goals to claim rewards.

The specific mechanics and details of these donation pools are to be determined in a future proposal.

Each token id will possess a generic attributes mapping, only controllable but delegatable by the DAO, allowing certain roles to be toggled on and off. I.e. “mentor”, “council member”, etc.

This is how the DAO will initially select mentors, and how specific avatar holders will be able to claim from donation pools, depending on their level of contribution to the overall community.

Rarity will not affect the nature of these roles in any way.

A future proposal may suggest that each token id have an associated inventory array with address/id pairs for other NFTs, owned by the avatar. This will allow the DAO and/or mentors to award skill badges, challenge accomplishments, community recognitions, etc, to an avatar.

An alternative implementation could be to not associate accessories to an avatar, but to the EOA holding it, so that the owner may move these accessories between avatars at will.

Calling the contract’s mint() function will require the sender to pay a minimum fee of 0.2 ETH. If the sender sends more than that, it will be considered as a donation, which will result in the probability of producing a rarer NFT to increase.

The way this will work is by calculating a number from 0 to 1, depending on the size of the donation, capped to a max value of 13.8 ETH. This means that minting with 14 ETH will remove 50% of the least rare avatars in the available set, and pick one from the remaining set of avatars.

Fees and donations paid during minting will immediately be distributed as follows:

The main contract will include a basic mechanism to bids and offers of avatars, thus allowing for their exchange after minting.

When an avatar is exchanged, 5% of the bid will be distributed in the same ratio as with minting.

All roles previously assigned by the DAO will be reset during an exchange. 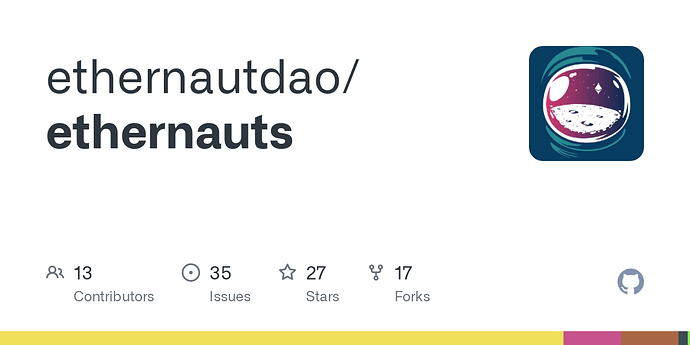 Contribute to ethernautdao/ethernauts development by creating an account on GitHub.

All contracts and scripts pertaining to the implementation will be audited and fully tested (unit and integration tests) before deployment.

All contracts and minting scripts will reside in a public repository. All contracts will be verified in Etherscan.

However, code pertaining to the actual art generation will be private. This is necessary to guarantee NFT randomness during minting.

The initial ownership of the contracts and treasury will potentially be a 4/7 multisig wallet, but we encourage a governance proposal to quickly follow after this one so that the community can elect a council that replaces the initial multisig members:

Right now the issue with generative NFTs is that the premium goes to the miners / is burned instead of going to the artists / DAO. Maybe we can do something to capture that value instead of burning it with high gas fees. Maybe changing how the auction is done? Dutch Auction or something like that?

Can you elaborate on this, what do you mean by premium?

Current random NFTs drops are cheap in the sense that their price is low. But the users that get it are the ones that pay 1000 gwei of gas. This extra gas goes directly to the miners and network with the burn, but not really to the DAO or the artists doing the drop.

Ah, I see. Do you really think that this -not drop, but sale- could spike gas prices in the Ethereum network to 1k? Do you know or can think of mechanisms to avoid it?

If the art is good it will

. Changing the type of auction can help. For example, doing it with Dutch Auction or like Unisocks. Miso from sushi has some built-in already. https://miso.sushi.com/

Okay cool. Thanks for the feedback! We’ll make sure to do some R&D on this and include it in the final spec if the community wants to move forward with this proposal.

Just a thought, what if it’s deployed on L2 (looking at OP) to emphasize the future-oriented nature of the DAO? Or still to early?

Hmmm very interesting! Certainly worth consideration. Could solve the minting war problem cause you cant use a higher gas price in Optimism. First come first serve.

High gas fess , moreover a part of which might be burned eventually seems wasteful
Layer2 suggestions would be nice